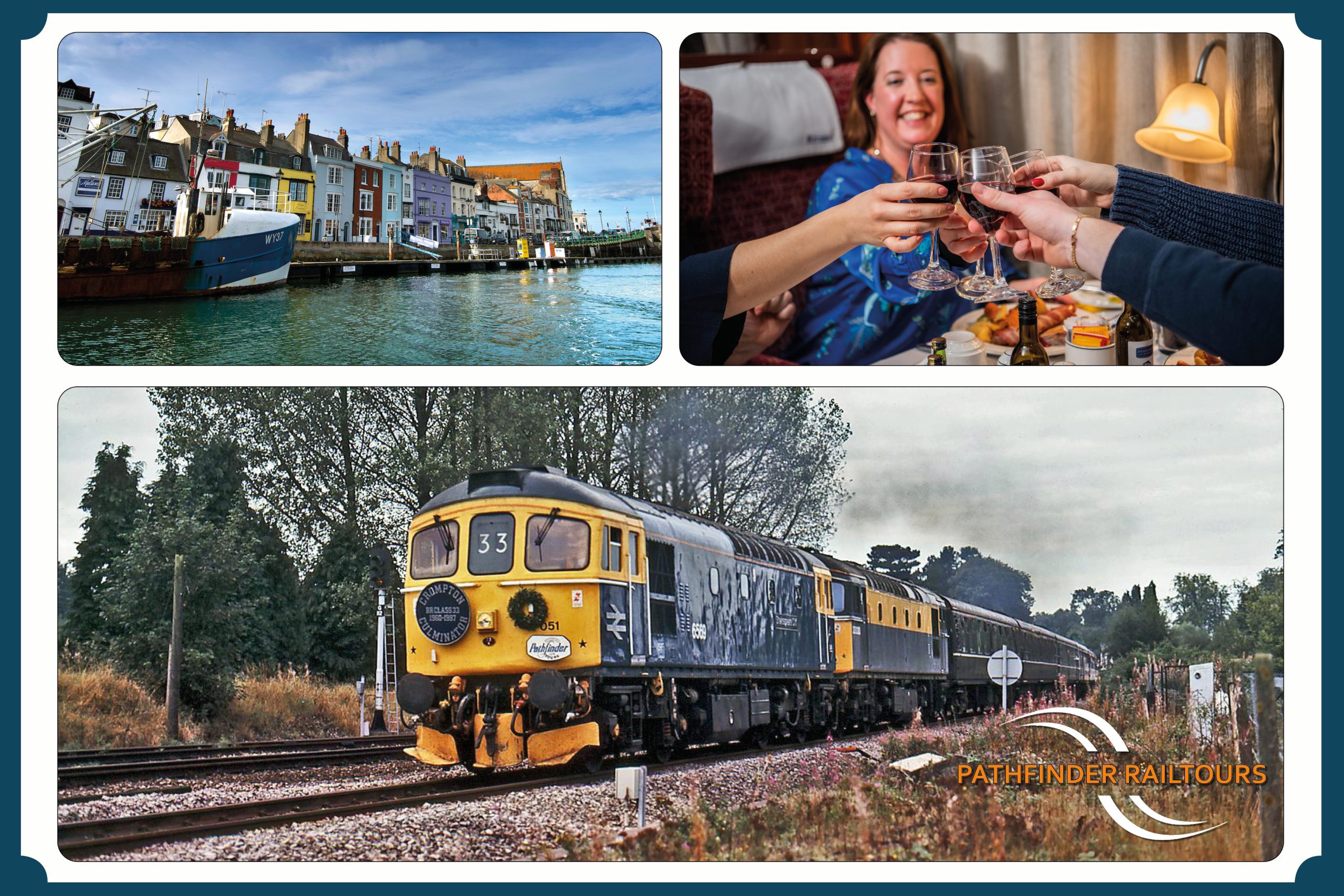 SATURDAY 6 AUGUST 2022 A DAY OUT TO THE SEASIDE RESORT OF WEYMOUTH, WITH DIFFERENT

A DAY OUT TO THE SEASIDE RESORT OF WEYMOUTH,

WITH DIFFERENT SCENIC ROUTES OUT AND BACK

After joining points from Burton-on-Trent to Cheltenham Spa, this train will make a large circular journey through Central Southern England, starting with a climb through the Golden Valley into the heart of the Cotswolds. Passengers may also join us at Swindon before a run through the Vale of White Horse into the Thames Valley and to Reading, where we turn south to Basingstoke.

Downland scenery leads through Winchester to Southampton, a major port, after which the route lies through the New Forest National Park to Bournemouth and Poole. An undulating run through the Dorset heathlands leads to Dorchester and the precipitate descent to Weymouth, where we are expecting a break of two to three hours in this historic seaside resort.

The return route leads back to Dorchester, where we now continue north by way of another scenic line through Maiden Newton to Yeovil and on to Castle Cary. From there we keep close to the Somerset / Wiltshire border to reach Westbury, and soon the Avon Valley through Bradford-on-Avon to Bath Spa and the outskirts of Bristol. After a set-down at Bristol Parkway a run through Severnside leads back to Cheltenham Spa and the return to Burton-on-Trent.

We have requested that this train is hauled by a pair of veteran Class 33 diesels, a type that hauled most trains between Bournemouth and Weymouth from the mid 1960s to electrification in 1988. The locomotives will haul a rake of MK1 coaches from Riviera Trains.

Table for Two seats are available at a supplement of £40 per person in Premier Dining and First Class.

This train is now FULLY BOOKED

*Premier dining is unavailable from Swindon station. Bristol Parkway is a set-down only stop, as our train will not be routed via Swindon on the return journey. 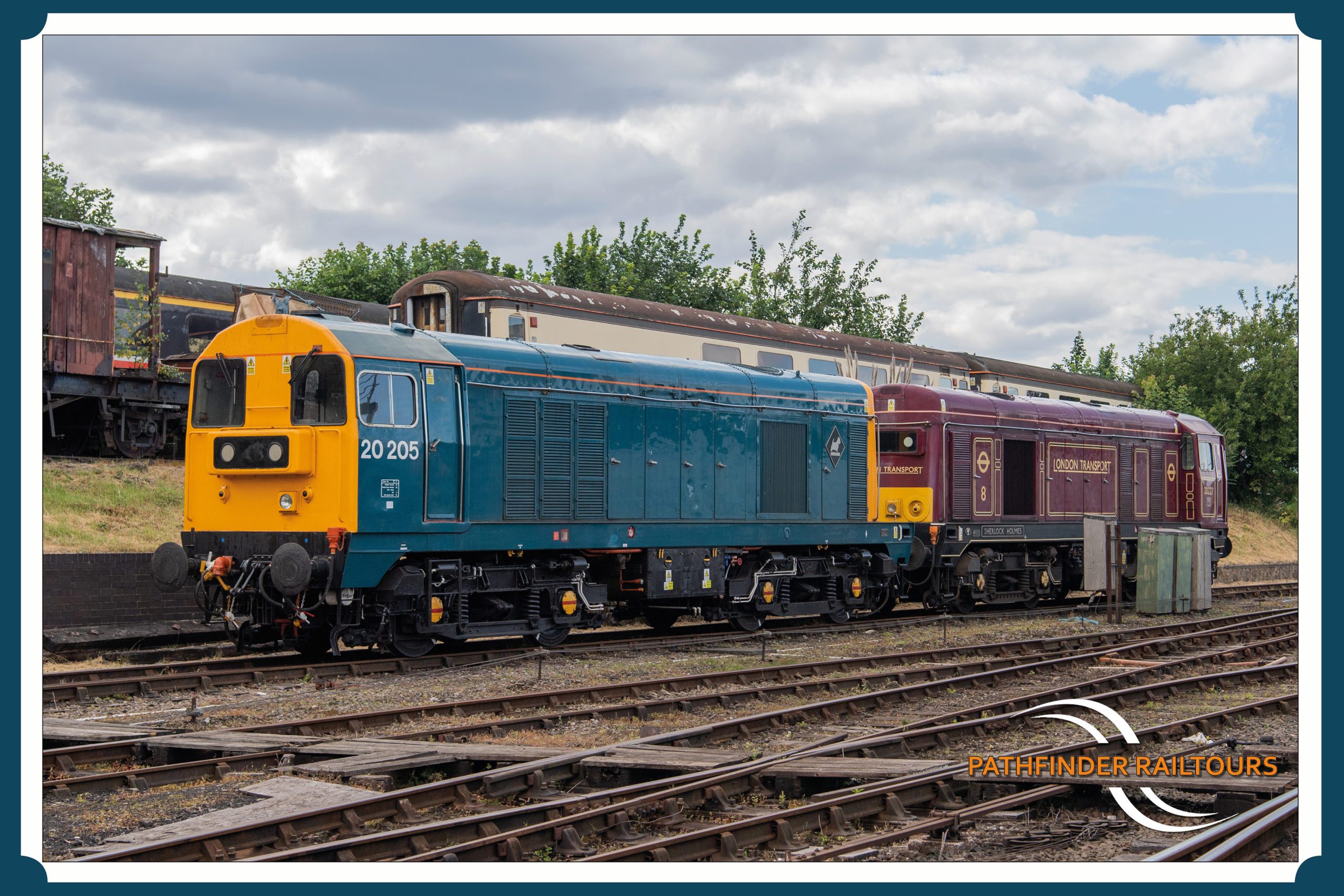 In response to a number of requests for specific sections of track in the West Midlands that have not been visited recently, we are very pleased to be able to offer this railtour that includes visits to Hams Hall Reception Line and to Donnington Railfreight Terminal in Shropshire. In addition to a number of Goods Loops and requested specific lines, the route also features traversal of the Oxley Chord, the hard climb over Cannock and ascent of the Lickey Incline. Add in an hour’s break at Shrewsbury whilst the carriages are serviced, haulage by Class 20 power throughout (courtesy of loco owner Michael Owen and SLC Rail), and we think that this limited load train will prove very popular.

Onboard catering will include a full buffet service with the Gricers Grill hot food menu, plus a selection of real ales & cider.

A sales stand will also be open, and a charity raffle will be organised. 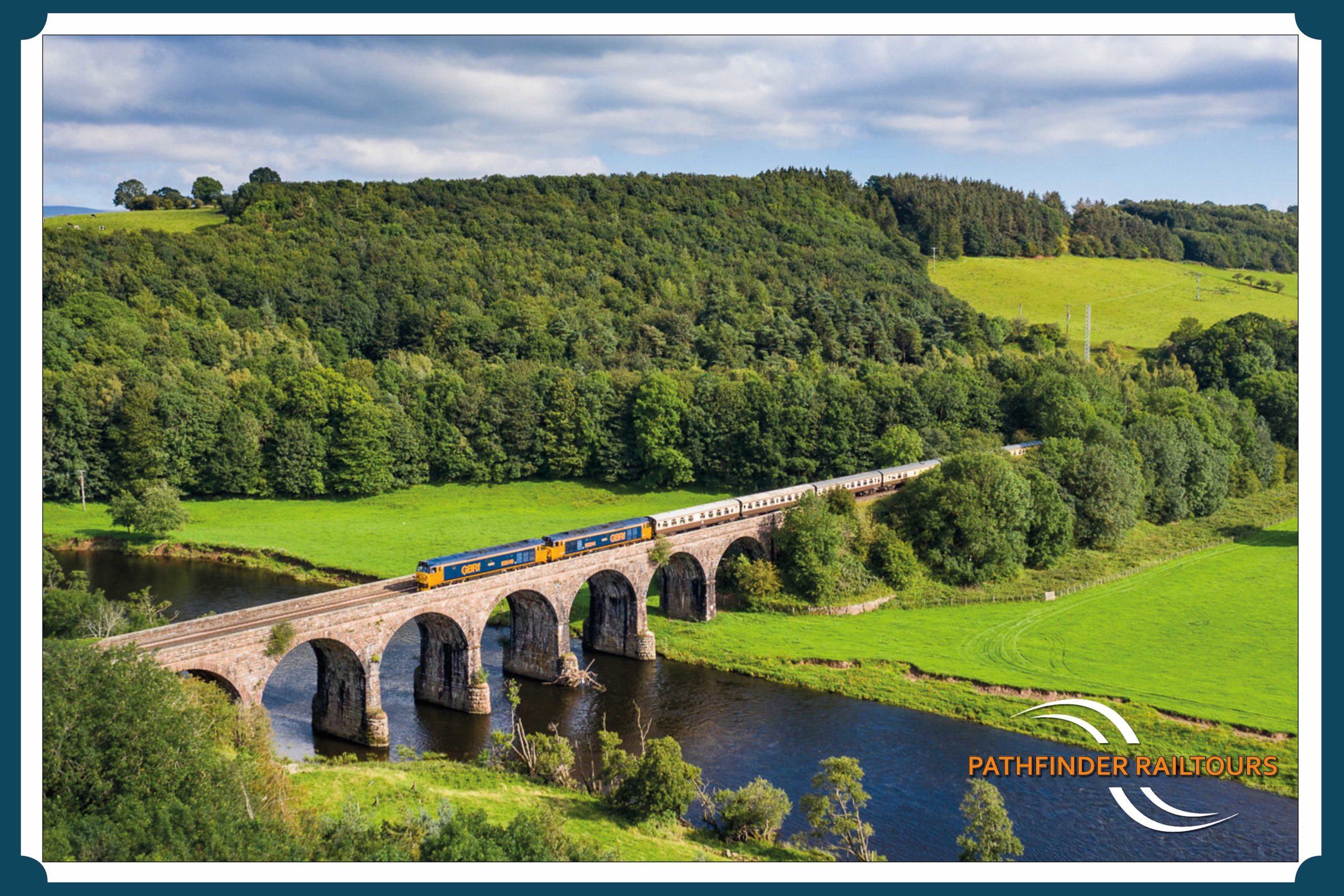 TAKE A CIRCULAR TRIP AROUND THE NORTH OF ENGLAND, UP THE DURHAM COAST

AND OVER THE ICONIC SETTLE AND CARLISLE LINE

It is with great pleasure that Pathfinder Railtours presents this wonderful day out on an exceptionally scenic excursion to Carlisle via York, along the stunning Durham Coast and the Tyne Valley

We are expecting an afternoon break of around two hours at/in Carlisle, where a look around will be on offer before we make our descent along the famous Settle and Carlisle Railway and traverse the magnificently historic 24 arched Ribblehead Viaduct

The locomotives, courtesy of the Class Fifty Alliance, are expected to head the train throughout, hauling British Railways 1950s Mark 1 carriages.

Table for Two seats are available at a supplement of £40 per person in Premier Dining and First Class.
*Premier dining is not available from York.