The Here, There and Everywhere Trains - Again! Confirmed Timings

15feb(feb 15)11:12 am16(feb 16)11:12 amThe Here, There and Everywhere Trains - Again! Confirmed TimingsThree mini excursions powered throughout by English Electric Class 37 locomotives on a Friday and Saturday. Choose to book a rover ticket or separately. 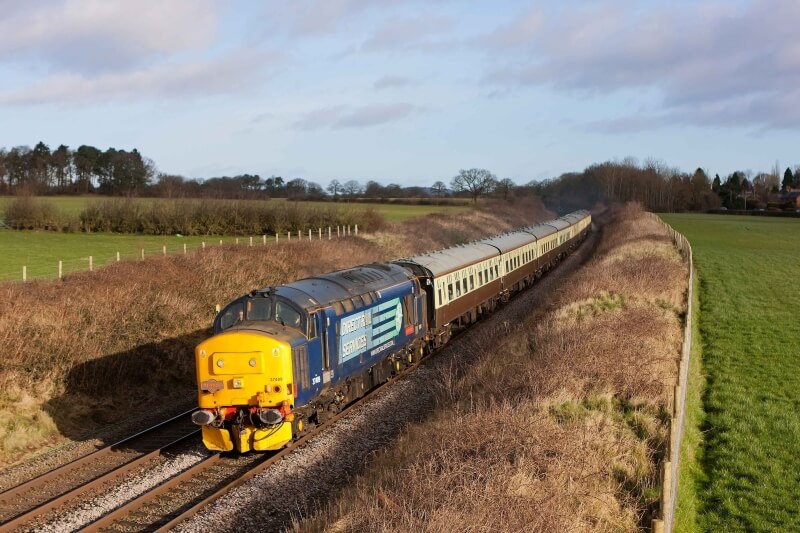 Friday / Saturday These mini excursions traverse the Surrey Hills, the Thames Valley and finishing off with a rounding of Kent and East Sussex. Choose

These mini excursions traverse the Surrey Hills, the Thames Valley and finishing off with a rounding of Kent and East Sussex. Choose to book a combined rover ticket, or separate tours.

There will be short breaks at Paddington on Friday evening (2200 to 2230) and on Saturday morning (0645 to 0820), and also at several of the stations that we visit throughout Saturday. The on-board catering will include a full buffet service, real ale and the Gricers Grill.

From Eastleigh (depart 1430), Basingstoke (depart 1505), Reading (depart 1535, back 2040) and Ealing Broadway (depart 1640, back 2135) for a spin round Surrey by way of East Croydon, Redhill and Guildford to Reading, then back to Paddington for 2200 – and it would be rude not to go through several goods loops on the way~. Fare includes a chicken or vegetarian curry.

~ Dawley (16:xx) and Hayes & Harlington (21.xx) should feature along with the Acton Dive Under and Old Oak Flyover.

A 2230 Paddington start and, via the Old Oak Flyover, into the Heathrow Express Traincare Facility – with very grateful thanks to Heathrow Express. Then it is west to Heathrow Tunnel Junction to reverse, followed then by four branch lines: the freight branch to Brentford and the passenger branches to Bourne End, Henley-on-Thames and Windsor & Eton Central, then finally by way of more ‘red line’ bits~ and pieces back to Paddington for 0650.

From Paddington at 0820 for a big circle round south-east England, taking in Sheerness-on-Sea, Ramsgate, Ashford International, Eastbourne, Brighton, Bognor Regis and Littlehampton, then back via the Mid Sussex line to Clapham Junction (2130), Reading (2230) and Eastleigh (2330).

Well that was the plan but amended engineering work on the Brighton line south of Three Bridges scuppers it. So, our amended plan (including the Caterham Branch!) is: